In this edition of Valuation Insights, we present highlights from the Duff & Phelps 2018 U.S. Goodwill Impairment Study, now in its tenth year, which examines general and industry goodwill impairment trends of more than 8,400 U.S. publicly-traded companies through December 2017.

Robust M&A activity in 2017, fueled by favorable economic and financial market conditions, added nearly $319 billion of goodwill to U.S. companies’ balance sheets, the highest level of aggregate goodwill added since Duff & Phelps began compiling this data in 2008. However, despite the strength in both the global economy and U.S. equity markets, U.S. companies experienced a 23% increase in the aggregate goodwill impairment (“GWI”) amount, from $28.5 billion (U.S. Public Companie) in 2016 to $35.1 billion in 2017. On the other hand, the number of GWI events increased only marginally, from 288 in 2016 to 293 in 2017. This implies that the magnitude of impairments generally increased with the average GWI per event rising by 21% in 2017, to $120 million.

Current 2018 disclosures indicate that the top three GWI events alone will approach $30 billion, which combined with several other material impairments already reported, suggests that the 2018 aggregate GWI will likely surpass the 2017 amount. 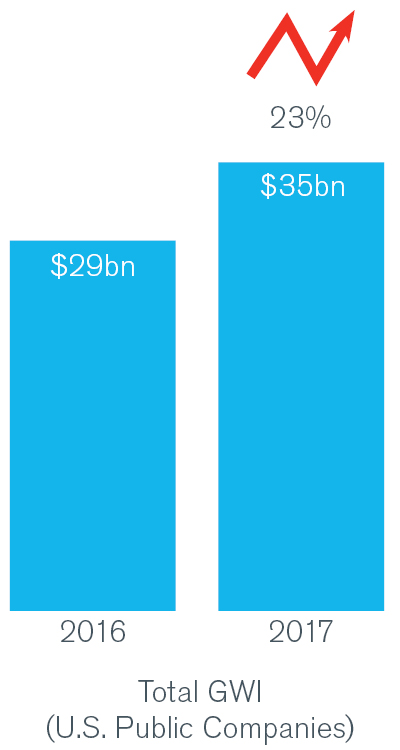 Seven out of the ten industries analyzed saw their aggregate GWI amounts increase in 2017. The Consumer Discretionary sector has suffered from an increasing share of GWI for three consecutive years and was the hardest-hit industry during 2017, as overall GWI increased by 71% from $5.4 to $9.3 billion. This industry may face further strain in the months ahead, given that economists and market analysts are predicting a slowdown in economic growth. Healthcare and Telecommunication Services also suffered from dramatic increases in GWI from 2016 to 2017, with Healthcare GWI surging from $3.1 to $7.2 billion and Telecommunication Services from $3 million to $4.9 billion.

In contrast, the Energy sector, the worst-impacted industry for three consecutive years (2014-2016), saw the biggest improvement in goodwill impairments during 2017, signaling a resilient recovery in this vitally important part of the U.S. economy. The improvement may be short-lived, however, as oil prices have retreated from their 2017 levels, with West Texas Intermediate (WTI) crude oil dropping 24% in 2018. Information Technology also had a material decline in GWI, dropping from $4.1 billion in 2016 to $1.3 billion in 2017.

Over the past 10 years, the accounting model for goodwill under U.S. GAAP underwent several significant changes and simplifications. A qualitative test (aka., Step 0) was introduced in 2011, while in 2014 a private company alternative was created, allowing private entities to elect the amortization of goodwill on a straight-line basis over a specified number of years. Most recently, the model was further simplified through the issuance in January 2017 of Accounting Standards Update (ASU) No. 2017-04, Intangibles—Goodwill and Other (Topic 350): Simplifying the Test for Goodwill Impairment.

ASU 2017-04, which eliminated Step 2 of the goodwill impairment test, has an effective date for calendar year-end U.S. publicly-traded companies beginning in January 2020. However, ASU 2017-04 allows for early adoption and the 2018 Study revealed that, of the companies recording the top 10 largest goodwill impairment events in 2017, 80% have already adopted the new simplified test. Whether this rapid pace of early adoption will extend to the general universe of companies remains to be seen.

The FASB’s main objective in introducing these simplifications was to reduce preparers’ cost and complexity in the subsequent measurement of goodwill. Such savings may lead more companies to early adopt the modified impairment test. The FASB concluded that the pared-down model would still maintain the usefulness of the information provided to users of financial statements. In addition, some FASB stakeholders (e.g., FASB’s Investment Advisory Committee) do not believe a further simplified goodwill accounting model, such as the private company alternative, would be suitable for public companies. In contrast to non-cash amortization charges, which have no information value, an impairment model founded on fair value can provide insight about management’s stewardship in making investment decisions and successfully integrating acquisitions.

Forthcoming in the first quarter 2019, the sixth edition of the Duff & Phelps European Goodwill Impairment Study will examine general GWI trends across industries and countries in the European market, by analyzing firms within the STOXX® Europe 600 Index. European companies in the Index recognized a total of €18.5 billion of GWI in calendar year 2017, a decrease of approximately 35% from €28.4 billion in 2016, reflecting a strong year of economic expansion.

Built upon the foundation of its renowned valuation business, Kroll's Tax Service practice follows a detailed and responsive approach to capturing value for clients.