In 2016, the region recorded total deal activity valued at US$111.8 billion spread across 1,308 deals. Globally, more than 35,000 deals valued at over US$3 trillion were registered in the same period. Key findings from the report are summarized below. 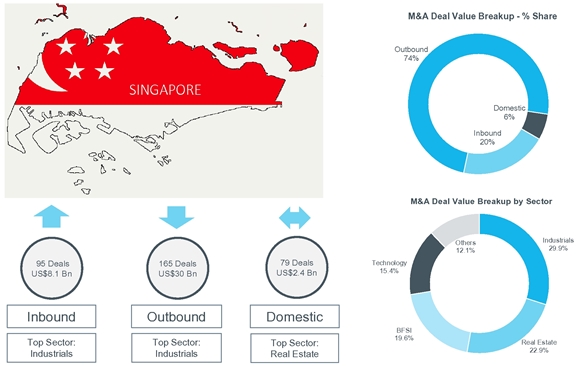 The continued momentum in deal volume was mainly attributable to sizeable M&A transactions by the Sovereign Wealth Funds (“SWF”), GIC and Temasek Holdings in consortium as well as stand-alone investments, complemented by other notable deals such as CMA CGM’s acquisition of Neptune Orient Lines, Singapore Telecom’s stake acquisition in Intouch Holdings and Qatar Investment Authority’s acquisition of Asia Square Tower 1.

Outbound deals continue to drive Singapore’s M&A deal value
While Singapore M&A deal volumes grew 16% in 2016, deal values declined by 18% compared to the same period a year ago. In 2016, there were 485 cross-border M&A deals in Singapore registering US$69.7 billion, with the bulk of total deal values coming from 318 outbound deals (Singapore-based companies or SWFs acquiring overseas companies) worth US$57 billion contributing to over 81.9% of the total deal value in 2016 for total cross border deals. Domestic deals contributed to 15.8% of total M&A deal value with 199 deals valued at US$13.0 billion.

Highest transacted value of PE/VC deals in Singapore in 2016, since 2012
PE/VC investments in Singapore companies for 2016 have grown steadily to US$3.5 billion compared to US$2.2 billion, US$2.4 billion and US$0.9 billion for 2015, 2014 and 2013 respectively. Some of the notable PE/VC investments in 2016 were SoftBank Group’s investment in GrabTaxi valued at US$750.0 million, BOC Aviation Pte Ltd by China Investment Corporation and other investors valued at US$572.0 million; GIC, Bain Capital and Advent International’s US$350.0 million investment into Quest Global Engineering Pvt Ltd; and Baring Private Equity’s US$320.1 million privatization of Interplex Holdings Ltd. Most of the notable deals were minority stake investments unlike the last few years, which saw more buyouts. 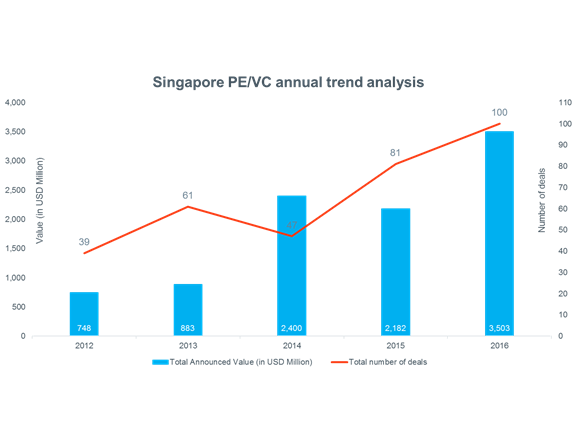 #1 ranked provider of fairness opinions for boards of directors and special committees.