COVID-19 has brought an unprecedented crisis to global economies and financial markets. Unlike past economic shocks, which were often precipitated by predictable–if not familiar–factors, the source of the current turmoil is a pandemic with no recent historical precedent.  So far, the defense against the virus has been through economic rather than pharmaceutical measures.

As a result, this has had a paralyzing effect on nearly all sectors with very few market participants unscathed. This poses a significant conundrum for the investment community in terms of how to navigate the crisis, protect investors and even identify opportunities.

In an effort to learn how investment professionals are approaching this challenge and specifically, the topic of valuation, we surveyed investment managers globally to gain an insightful, and at times surprising, look at the response.

The majority of respondents (64%) to the survey identify as being a general partner or investment fund manager. Of those, private equity and private debt fund managers accounted for nearly two thirds of those surveyed.

The perspective they offer is predominantly of developed markets, with 52% of respondents focused on the North American market and 41% focused on Western European markets.  Approximately 19% of respondents identified themselves as investing globally.

A Negative 2020, but Sentiment Improves in the Long Run

With the coronavirus pandemic shutting down segments of global economies, many of the respondents expect the GDP growth of their focus market to contract this year. This is not a surprise since the majority of respondents focus their investments in the U.S. and European markets, which have both been severely impacted by the virus. 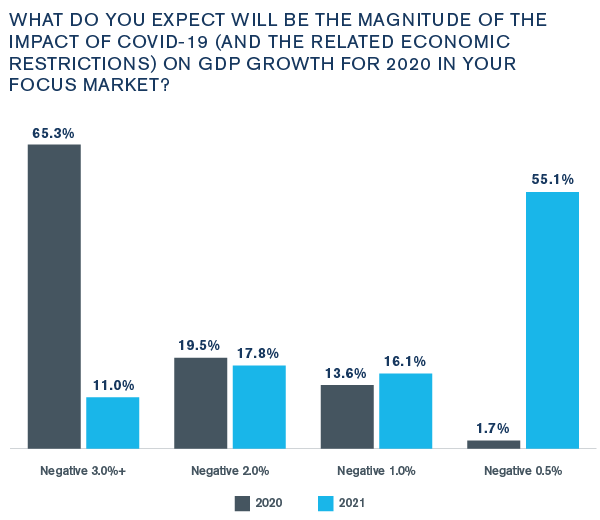 However, when viewed over a longer timeframe, this sentiment improves. When asked about how GDP growth could be impacted going into 2021, the majority of respondents (55%) expect the virus to have a negative impact of just 0.5%. However, 11% of respondents still expect the pandemic to have significant impacts next year with 3% or more contraction to GDP growth.

With this survey, we wanted to gauge investment mangers’ perspectives on how the coronavirus pandemic has impacted value assessments. When respondents were asked to determine the most important factors for fair value assessment, the crisis’ impact on Q1 and Q2 cashflows was the most notable (14%).

However, nearly half of respondents (47%) coupled this with quarter-to-quarter market capitalization changes, cash reserves running out and increases in credit spreads/shifts in credit quality. These issues are arguably knock-on effects from the immediate impacts governments’ response to the coronavirus are having on cashflows for all kinds of businesses.

Sticking with value, the majority of those investing through close-ended funds still found net asset values (NAVs) useful in making investment decisions (87%). This was compared to 13% who regard NAVs as irrelevant due to close-ended funds being “locked up.”

That said, a significant majority (86%) expect NAVs to meaningfully decrease between December 31, 2019 and March 31, 2020. Of this figure, nearly half expect NAVs to fall by up to 10% with most (36%) anticipating reductions between 6% to 10%. Worryingly, 9% of respondents are anticipating NAVs to decline by over 20%. 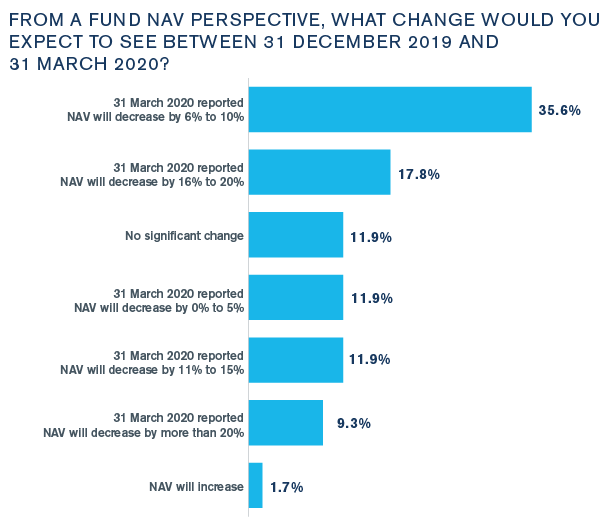 Even though this paints a gloomy picture for the outlook of many funds and their assets, our respondents had somewhat pragmatic views on corporate bankruptcies. When asked about investments where the potential outcome is binary (whether the investee will survive or not), 63% said they would still need to do scenario analysis to make a solid determination. Meanwhile, 10% admitted they wouldn’t know either way, which suggests that a lot about this unprecedented crisis is still perplexing investors.

Overall, when asked about the fair value of their investments by the end of 2020, the majority of respondents were optimistic that these would be worth more than on March 31, 2020 (57%), but 47% do not expect values to recover to pre-crisis levels seen at the end of 2019. In terms of fair value, only 11% expect their investments to be worth more after the crisis than before, with 26% expecting values to be less overall. The group’s forecasts for NAVs decreasing reveals concerns about the limited impact a post-crisis recovery could have on assets.

Looking Ahead to the New Normal

Both the U.S. Federal Reserve and the European Central Bank have unveiled unprecedented measures in response to the pandemic. Since the majority of the respondents have an investment focus on the U.S. and Europe, these measures have largely been welcomed, with 71% saying they feel enough economic support is being offered in their regions.

Although there are encouraging signs with the virus potentially starting to abate in some countries, 71% of respondents expect social distancing to continue for at least the next three months in their country, with 21% expecting measures to last six months in total. 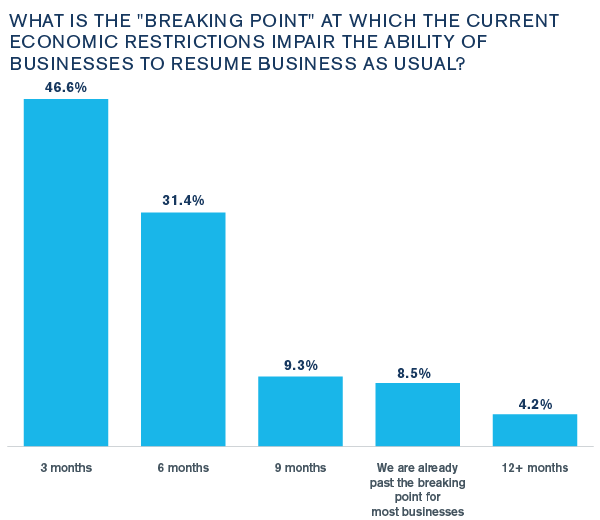 However, in a positive turn of events, our respondents felt that private capital was embracing environmental, social and governance (ESG) qualities during this crisis. When asked about the extent to which this was true, 32% answered “mostly” while 30% agreed most private capital-backed businesses were acting in the best health and safety interests of their communities, even if it isn’t in their own financial interests to do so.

Heightened regulatory concerns and vigilance, together with increased investor scrutiny, have led to increased demand for independent expert advice.