Search Jobs
Is There a Weak Link in Supply Chain Finance? Restructuring

Supply Chain Finance (SCF), also known as Reverse Factoring or Supplier Finance, is a working capital financing solution designed to create a symbiotic commercial relationship by optimizing cash flow for a supplier whilst facilitating profitability and supply-chain stability advantages for the customer (“the buyer”).

SCF is sometimes mistaken for trade finance, which is often focused on import and export, while SCF commonly features expansive supply chain networks spanning a range of services, products and sectors.

This article considers the practicalities for the suppliers i.e. those businesses that receive payments from buyers and draws a comparison with other finance options a supplier may use as an alternative to using a buyer’s SCF facility.

When compared to alternative working capital financing, such as invoice finance, SCF looks in the opposite direction down the supply chain and provides a financing option to the buyer to accelerate the payment of supplier invoices. In contrast to invoice finance, where a lender usually spreads the credit risk over several debtors, the SCF provider is concentrating its finance on one entity with the strength of its balance sheet alone supporting the debt. As a consequence, SCF facilities remain an exclusive tool of large corporates and multinationals.

Typical stages of how SCF works: 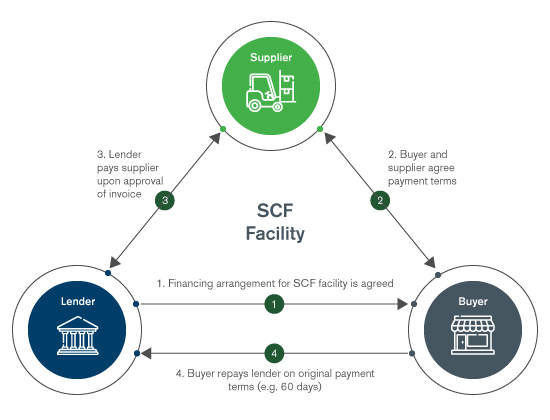 Prima facie, SCF brings significant benefits to all parties. However, as with many types of finance products, these benefits have equivalent quid pro quos, especially for the supplier. To highlight these compensating factors, it is helpful to compare SCF to one of its primary alternatives—invoice finance.

When considering the comparison, it is worth noting that it is highly unlikely that a supplier’s entire customer base will be able to offer separate SCF facilities, and therefore in practice a supplier will typically use a combination of working capital funding options, including SCF and invoice finance in parallel.

Practical benefits of SCF vs invoice finance for the supplier:

Whilst SCF should expedite payments, in our experience there can be some financial disadvantages and practical challenges for the supplier:

Although SCF is a finance facility between the buyer and third-party lender, with the supplier receiving the benefits of early payment, the suppliers should also be mindful of the possible weak links in SCF if your business is paid by a buyer on accelerated terms using SCF.

SCF Is a Powerful Tool to Support a Large Supply Chain, So What Can Go Wrong?

Arguably one of the most controversial aspects of SCF from an accounting perspective is that significant amounts of lending do not have to be classified as debt. This type of accounting can be optically problematic, and in the case of Carillion shortly prior to its collapse in 2018, up to £500m of debt due its SCF lender was categorized as trade payables, whereas loans and overdrafts on the balance sheet were reported in the region of only £150 million. Argubaly this accounting treatment enhanced the appearance of Carillion’s balance sheet, masking its true overall debt levels and understating its gearing.

The post-mortem of Carillion’s downfall disclosed that payment terms with its suppliers were an average of 120 days (this was also the terms on which the SCF lender was repaid). In December 2017, Carillion’s SCF facility was withdrawn. The liquidity effect for Carillion and its supply chain was catastrophic, resulting in the almost immediate failure of the construction giant and terminal collateral damage through its supplier network.

There are multiple accounts of similar failures synonymous with Carillion which has brought the subject of SCF regulation into sharper focus. It is widely reported that the accounting treatment ought to be revised given the debt-like features of SCF, to report the true nature of the borrower’s indebtedness. As the access to SCF is diverse through digitalization and fintech’s, there have also been calls for a wider interrogation and formalization of SCF lending across the board.

What Does the Future Hold for SCF?

Given the economic slowdown due to COVID-19, it is widely publicized that demand for SCF has soared to combat liquidity contraction. With SCF seemingly becoming more popular, this may be a symptom of management teams prioritizing cash flow headroom over short-term profit. However, SCF may be being used as a sticking plaster where more acute structural challenges exist.

An SCF facility is only as strong as its lender and its borrower. COVID-19 has left a damaging imprint on many of the strongest of pre-pandemic debtor covenants and as the ongoing economic uncertainty continues, the lasting longer-term impact on the users and purveyors of SCF remains unclear.

The adage that a chain is only as strong as its weakest link speaks volumes, and as recent history has shown, if the SCF train derails, the resultant pile-up will bring widespread casualties.

* The lender either takes a fee by discounting the payment to the supplier or by charging a fee to the Buyer when the invoice is paid.