The world’s economic outlook is becoming more uncertain. 2017 and early 2018 saw an almost synchronized expansion in the United States, Europe, China and numerous other emerging markets. Optimism was widespread and initial forecasts for 2018 and 2019 suggested that growth would continue at a relatively rapid pace in many parts of the world. The recent past has seen some loss of momentum and a number of forecasts have been clipped. Most of the hard data that have become available through the first half of this year, however, still paint a reasonably buoyant picture.

What seems to have changed for the worse is confidence, at least in Europe and in many emerging markets. Gone is the recent optimism, its place taken by uncertainties about trade policies, interest rate moves and exchange rate developments. And behind all this lies an even greater uncertainty: what will be the economic consequences of further political changes towards populism in Europe and of increasing tensions between major (and not so major) powers at the world level.

The U.S. and China, while not immune to some of these issues, are still growing solidly. Domestic demand is relatively buoyant in both countries and policies remain broadly accommodating. Fiscal policy, if anything, is too lax in America, but the Federal Reserve is gradually tightening on the monetary front. U.S. prospects, therefore, look reasonably favorable, at least over the short term. As fiscal stimulus fades and interest rates rise, growth will, however, slow down quite sharply in 2020. The danger of an acceleration in inflation, oft mentioned, has been averted so far. Import tariffs will add to price pressures, but labor market developments do not, as yet, point to sharply rising wages. As for China, growth continues at the desired 6 (or just above 6) percent rate, with corporate debt being gradually reined in and house price inflation slowing down. Tariffs on exports will hurt, but the government has sufficient fiscal flexibility for it to be able to offset a good deal of the pain.

Some countries in the emerging world, and notably India, are still performing well. A rising dollar and rising U.S. interest rates have, however, affected a number of other economies with heavy exposure to foreign-currency denominated debt. In many ways, this was inevitable. If anything, it is surprising how long it took for these trends to materialize. The exchange rates of, for instance, Brazil, Indonesia, Mexico, South Africa or Turkey and even Argentina remained relatively stable through 2017 and the early months of this year despite the Federal Reserve’s tightening. Pressures are now mounting. Combined with rising oil prices, this is boosting inflation rates in many emerging markets and leading to some tightening in monetary policies. Political uncertainties (notably in the two largest Latin American economies: Mexico and Brazil which have just seen, or will soon see, new Presidents) add to this less favorable picture.

Western Europe has, so far at least, been little affected by U.S. monetary policy. If anything, the euro’s recent modest decline against the dollar has been a welcome development. But both business and household confidence have declined almost everywhere. Some of this may reflect an adjustment to a more normal pattern after the euphoria that characterized the exceptionally high levels of optimism at the turn of the year. Some may also have been induced by the sharp rise in oil prices that has occurred over the last 12 months. Between mid-2017 and mid-2018 oil has gone from some $50 to some $75 per barrel, a 50 percent price rise that has, inevitably, reduced purchasing power. Some, however, must also reflect greater corporate and household worries about the future of international trade and of European integration. Trump’s threats of trade wars and populist governments’ threats to numerous EU policies, are taking their toll.

On the trade front, the guarded optimism of the last quarterly note (which wrote: “Trump’s main aim, after all, may not be the protection of domestic industry, but the reduction of barriers to U.S. exports, an outcome that would, in fact, promote freer trade”) has not, so far at least, been borne out by events. America has imposed tariffs on its steel and aluminium imports from Europe (and elsewhere) and on $34 billion worth of imports from China. Both the EU and China have announced retaliatory measures. Trump has reacted by threatening further action against both areas and both areas have warned that they would re-retaliate in turn. All this would be very unsettling for business and trade, particularly in sectors, like motor cars, characterized by complex international supply chains. Rough simulations made by Oxford Economics suggest that a trade war along the lines mooted above could reduce 2020 GDP levels by nearly 1½ percentage points in China, and by close to 1 percentage point in both Europe and the U.S. These are not massive numbers, but they would still significantly reduce growth rates that, with the exception of China, remain relatively modest. Any reasonable politician would refrain from such folly.

Europe’s second worry is of a longer-term nature. Populism in many economies has recently taken strong anti-EU and anti-euro connotations, and this particularly so in Italy, hitherto one of the continent’s most pro-European countries. The EU’s main economic achievements are not in the firing line (though trade agreements with third countries may be more difficult to achieve). The euro’s future, as often argued in these notes, remains, however, uncertain. The two parties that have formed the Italian government have withdrawn from their programme their erstwhile wish to subject Italy’s euro-membership to a referendum and have, for the time being, reined in some of their irresponsible fiscal proposals. Yet, the threat of both courses of action is still there and this is bound to affect confidence. Even in the absence of a euro breakdown (or of a “hard” Brexit), medium-term prospects in the Eurozone and in the UK are modest. Any change in the political outlook in the direction of greater euro-scepticism could only worsen them. 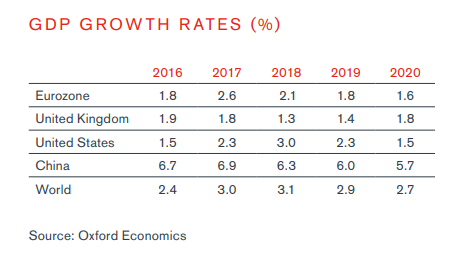 Duff & Phelps expressly disclaims any liability, of any type, including direct, indirect, incidental, special or consequential damages arising from or relating to the use of this material or any errors or omissions that may be contained herein.