Kroll, recently conducted a survey that revealed that 50% of organizations still do not have a firm LIBOR transition plan in place. The survey follows a similar one carried out in September 2020, and the results show that the overall percentage of firms without a plan has improved from 65% in September, to 50% in March. The survey also revealed that the number of respondents with plans to complete their transition before the December 31 deadline also improved from 30% to 45%. 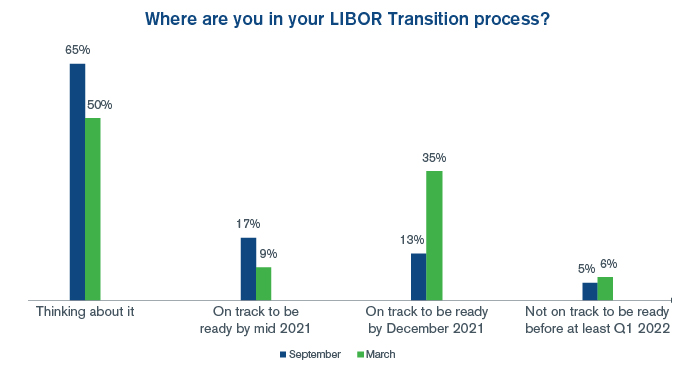 “The improvements are clearly welcome, but other responses in the survey revealed that over 50% of respondents from financial services firms had not set a date to cease new LIBOR linked issuance. In addition, 5% expected to be unable to meet the December 31 deadline which clearly shows there is much more work to do,” said Marcus Morton, Managing Director in the Valuation Advisory practice.

When asked where they were in the LIBOR transition process, 34% of financial institutions stated that they were on track to be ready by the end of 2021, while 14% said that they would not be ready until at least Q1 2022. This creates a wide array of where organizations stand in terms of when they will complete the transition away from LIBOR. 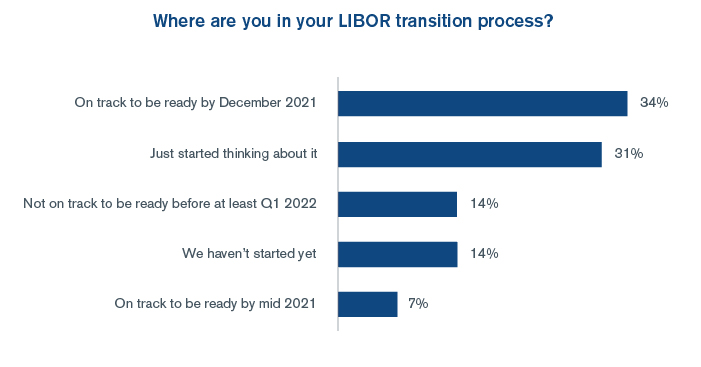 For non-financial institutions, when asked how much effort was being allocated towards the LIBOR transition, 50% indicated they expected their LIBOR transition would take some effort led by a small internal team, 21% indicated their expectation for a medium effort that could be handled with existing resources while 15% responded that they haven’t started thinking about the transition.

The replacement of London Inter-Bank Offered Rate (LIBOR) is a multiyear transformation, and the impact will be a seismic shift in core operations, vendor relationships and loan products.

Heightened regulatory concerns and vigilance, together with increased investor scrutiny, have led to increased demand for independent expert advice.