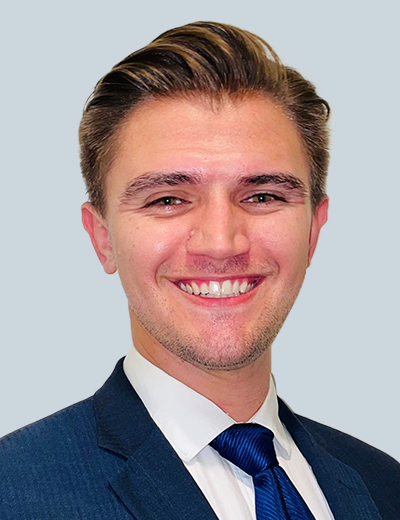 Kroll has been tracking Emotet since it was first identified in 2014, especially during its transition from a banking Trojan designed to primarily steal credentials and sensitive information to a multi-threat polymorphic downloader for more destructive malware. Today, Emotet operators stand as one of the most prominent initial access brokers, providing cybercriminals with access to organizations for a fee. For example, the partnership between the Emotet group and Conti ransomware operators is well known in the cybersecurity community.

Kroll frequently encounters Emotet in our incident response work and monitors Emotet activity closely in order to maintain robust detection and mitigation guidance for clients. In recent weeks, Kroll has observed three significant changes in the way that Emotet is delivered, architected and operated once an initial infection is successful:

Kroll is pleased to share the research we have conducted with the greater information security community. Our goal is to encourage further investigation that can better equip security professionals in preventing, detecting, mitigating and responding to cyberattacks.

Emotet operates as a botnet, with each infected device able to coordinate new malspam campaigns to continue the spread of the malware to more victims in different organizations. Kroll observed that as of April 22, 2022, the Emotet operators deployed a change to one of their most active botnet subgroups (tracked as Epoch4), affecting the delivery mechanism of the loader part of the malware.

Historically, Emotet is commonly introduced into a network through a malicious document (maldoc), such as a Word or Excel file, that contains a malicious payload within it. Recently, Kroll has observed a shift in Emotet’s method of distribution. The malware now leverages emails with password-protected .zip archive attachments that contain .LNK files instead of malicious documents.

LNK files are shortcut files that link to an application or file commonly found on a user’s desktop or throughout a system and end with an .LNK extension. LNK files can be created by the user or automatically by the Windows operating system. The .LNK files delivered by Emotet act as shortcuts that run embedded scripts when executed, as detailed below.

While packaging malicious PowerShell or VBScript in a .LNK file is not a new technique, it is the first time Emotet has been observed doing so. This could indicate that the developers are exploring other avenues of infection to bypass current security controls and training, which tend to focus on detection and interception of malicious documents.

.LNK delivery keeps documents out of the attack chain:

The latest initial infection vector used by Emotet comes in the form of a .zip file attached to an email. The .zip archive contains a shortcut (.LNK), which has the same name as the original .zip file. To date, the observed LNK files are consistently around 4KB in size. Since the early stages of this campaign, Kroll has already seen changes and updates to the malware delivery mechanics. At the beginning of the campaign, the LNK files initiated an embedded VBScript to download and execute the final Emotet payload. For example, the malware authors embedded the following command-line to run when the LNK file was clicked to find and execute the VBScript inside the LNK file:

Due to an error in the LNK name contained in the command-line (Password2.doc.lnk), these did not work and were quickly updated by Emotet’s operators.

This rapid release of an updated version in the wild indicates the operators are closely tracking the campaign for course correction. The new, working LNKs reference the PowerShell executables with malicious arguments, as shown in Kroll’s analysis of one of the malicious samples. Figure 1 shows the arguments contained in the output of Eric Zimmerman’s LECmd tool, used to analyze Emotet’s LNKs.

Figure 2 – SID contained in the metadata of the malicious LNK

The successful LNK execution will result in the download of a file from one of six URLs, which will be saved to a temp folder on the victim’s system and executed via regsvr32.exe. Figure 3 shows the decoded PowerShell script.

The LNK execution will temporarily write the decoded script to the temp folder and execute it from there. The same technique is used with the execution of the file downloaded from Emotet’s URLs, which has a random name and extension and is saved in the temp folder.

In reviewing one of the downloaded files, Kroll noted it is a Visual C++, 64-bit DLL compiled on April 25, 2022, at 22:02:11 (UTC) (0x62670C53). Embedded within this DLL is the Emotet loader, whose purpose is to extract, decrypt, and execute the final payload. Interestingly, Kroll parsed out a rich header from the executable that indicates it was compiled with Visual Studio 2005 8.0.

The first notable activity performed by the DLL is to allocate an area of memory with PAGE_EXECUTE_READWRITE protection, where the contents of another region of memory are decrypted and copied. Figure 4 shows the decryption routine from the debugger which, in this case, used the key sfdvkc9(akuGGHIoLP. Finally, execution is passed to this area. 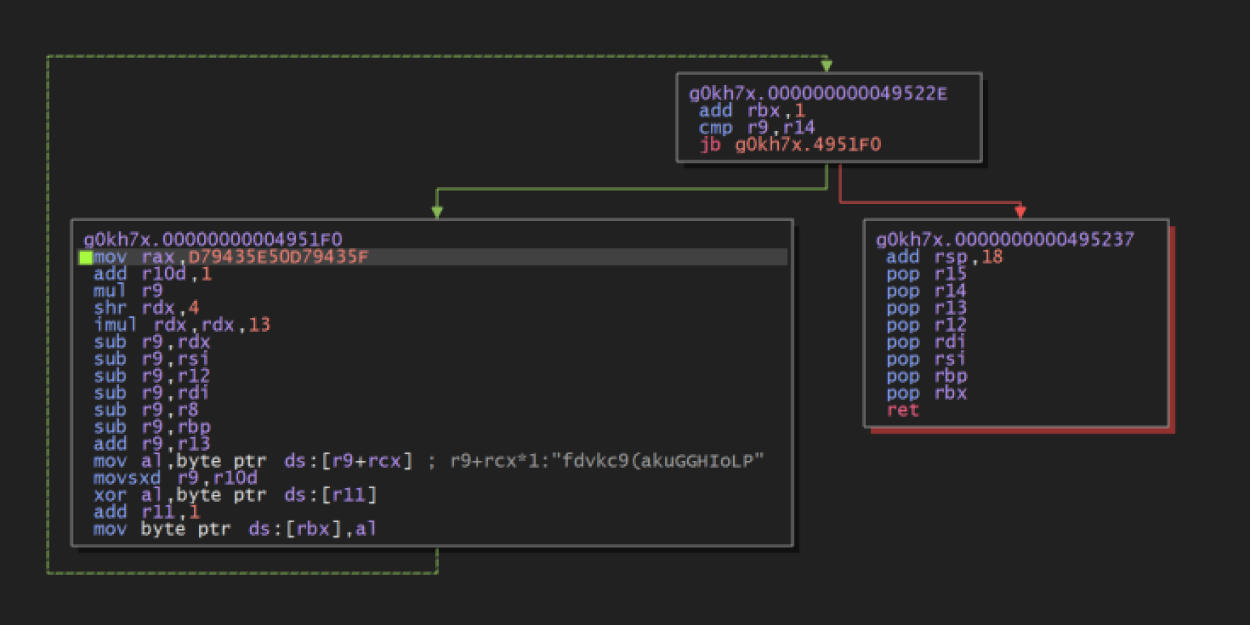 Dumping this area of memory revealed executable code that can be decompiled into ASM and statically analyzed. Its function is to load a specific resource of the DLL, decrypt it and pass the execution to it. This decrypted data is Emotet’s final DLL.

Figures 5 and 6 show parts of the decompiled dumped code, where the names of Windows APIs are being passed as arguments to a function. This behavior is typically associated with API hashing, a technique used by Emotet to obfuscate the imported libraries. 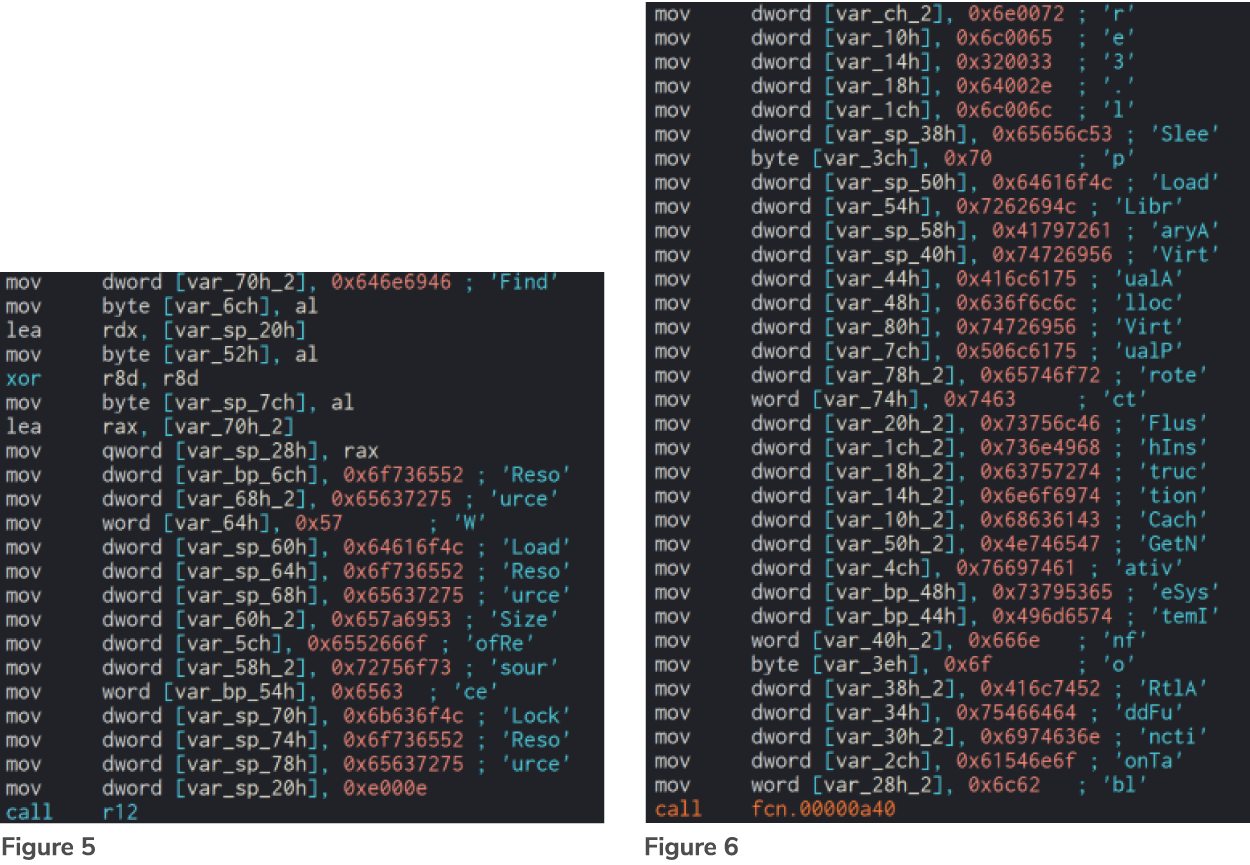 The code will allocate a second region of memory with PAGE_EXECUTE_READWRITE permissions, where the decrypted contents of a DLL’s resource are copied after being decrypted. Figure 7 shows some of the DLL’s resources. Highlighted is the resource used by the code, which stands out for two reasons: first, its size is unusually high (amounting to almost one-third of the total file size), and second, its high entropy (7.76) suggests that it may be encrypted.

The decryption routine of the last stage DLL is shown in Figure 8, along with a view of the memory dump where the MZ header is being written. 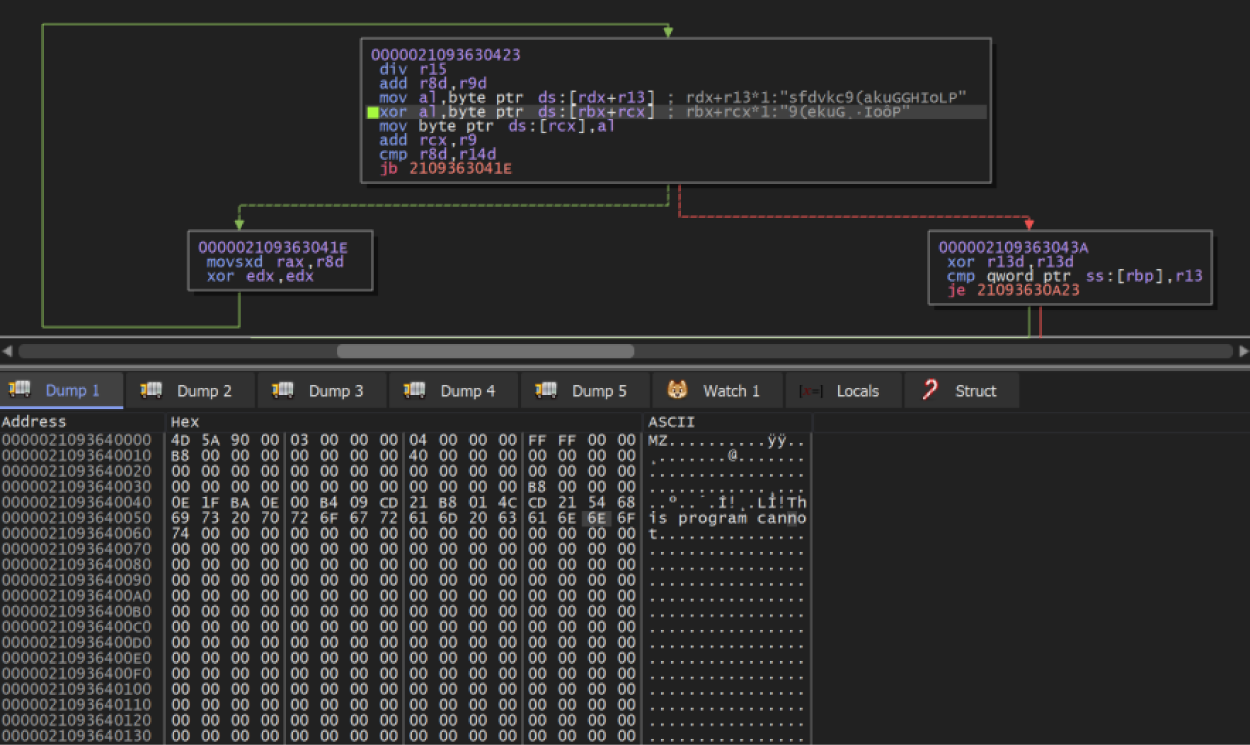 This memory area is Emotet’s final payload, a DLL. Through a third call to VirtualAlloc, its sections will be mapped to another region of memory to fix relocations, and then executed.

Emotet’s payload is a 64-bit DLL compiled on April 19, 2022, at 15:25:49 (UTC) (0x625ED47E). The original filename, as is typical with the recent Emotet version, is Y.dll. It contains many encrypted strings, which will be decrypted at runtime. Some of them are Emotet’s configuration (mainly, the network encryption keys) and a list of command-and-control (C2) IP addresses and ports, usually stored in the .data section.

To further hinder static analysis, the malware authors used control flow obfuscation techniques. Figure 9 shows an example of this in the disassembler. 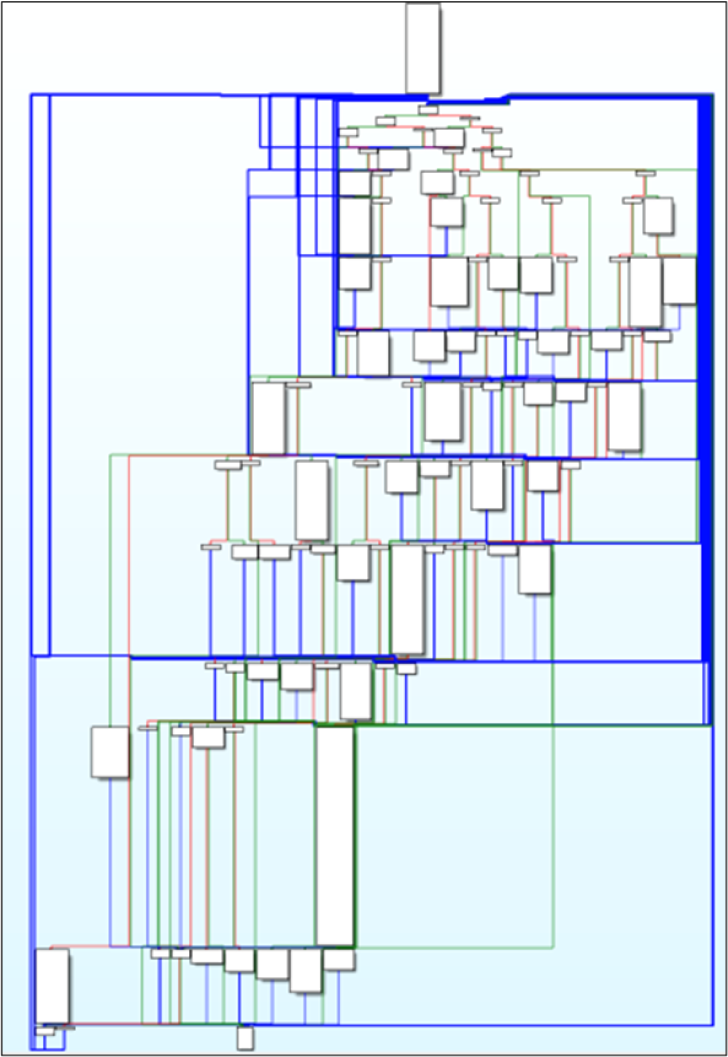 Figure 9 – Example of control flow obfuscation iused by the loader

Emotet establishes and maintains persistence on the compromised system by creating a key in HKCU\SOFTWARE\Microsoft\Windows\CurrentVersion\Run. It instructs the system on startup to run a randomly named copy of the loader that it has placed in the temp folder (Figure 10).

If the loader is executed with administrative privileges, it creates a new service that executes a copy of the malware (Figure 11).

Figure 11 – Service created when emotet is run with administrative privileges

Emotet’s successful installation will register the compromised host to a C2 server. An initial AES-encrypted HTTP POST request containing information about the host is made to the C2 which, in turn, will respond with a command to execute. Commands can be divided into four main categories (Table 1).

Modules are one of the key aspects of Emotet’s core functionality. They allow for greater control of the compromised host without the need to add malicious functionality to the loader. In fact, they are received by the C2 and are executed in-memory, leaving no trace on disk. Modules evolve continuously, with new ones being added regularly by the authors, and more notorious ones being used more often (Table 2).

Below is some guidance on the detection and prevention of Emotet infections. It is important to note that Emotet is an endpoint threat spread via email, therefore endpoint detection and response (EDR) and antivirus tooling is imperative to disrupting this threat. Many of these recommendations can also be applied to other forms of email-borne malware.

Understanding the initial infection vector is critical to detecting Emotet infections at the earliest opportunity. Emotet developers continue to experiment with methods of infection, and as such, it is important to test and develop detection methods as the threat changes. For example, consider using MITRE ATT&CK mapping for Emotet malware (Table 3).

Since malicious email delivery may not always be preventable, detection of Emotet at the earliest opportunity is key for rapid containment and remediation. Below are some early detection opportunities:

Emotet is still delivering malicious documents which use Excel 4.0 and VBA macros.

Emotet will use “living off the land” binaries (LOLBins) to perform DLL injection.

Treat any Emotet infection as a potential precursor to a ransomware event. Immediately initiate incident response playbooks. Consider including the following steps to contain an Emotet infection:

The ongoing development of Emotet reflects a significant time investment by the developers. Emotet changed regularly before the takedown by law enforcement on April 25, 2021, but the cadence of updates and spam campaigns has rapidly increased since its resurgence in November 2021.

The latest shift away from its reliance on malicious documents or Excel spreadsheets demonstrates that the operators believe they will see diminishing returns from using maldocs. This could be because they have seen reduced effectiveness in malware delivery or installation. They may also wish to preempt coming changes that Microsoft has announced in the way Windows handles documents with the Mark of the Web (MOTW) by automatically disabling execution of macros on files downloaded from the internet.

We have observed other actors exploring new ways of delivering malware to victims:

Although undoubtedly bruised by last year’s disruption, Emotet is certainly not dead. We assess that the Emotet developers will likely keep experimenting with new infection chains at this increased cadence. We also assess that the Emotet operators will move forward with large spam campaigns in order to rebuild the botnet, thus allowing them to sell the initial access they have gained to realize their return on investment.

Processes and strategies to optimize information produced through M&A, divestures and integration.