We are pleased to present the 2021 U.S. Goodwill Impairment Study (the “2021 Study”), now in its 13th year of publication. The 2021 Study examines general and industry goodwill impairment (GWI) trends through December 2020 of over 8,900 publicly traded companies incorporated in the U.S.

Our inaugural study was launched in 2009 and focused on capturing GWIs recorded by U.S.-- based companies and industries at the onset of the global financial crisis of 2008-2009. We find ourselves again in a period of significant upheaval, with companies forced to navigate the global economic crisis created by the COVID-19 outbreak.

This year’s edition also takes a closer look at the largest 30 impairments recorded during 2020. As an additional feature this year, we provide information on the segment and reporting unit structure of these 30 companies, to the extent that such information was disclosed in financial statements. Finally, this study also aggregates the GWI taken by U.S.-based companies up to the time of writing for calendar year 2021, which demonstrates the extraordinary pace at which many companies and industries recovered from the COVID-19 recession.

Highlights of the Study 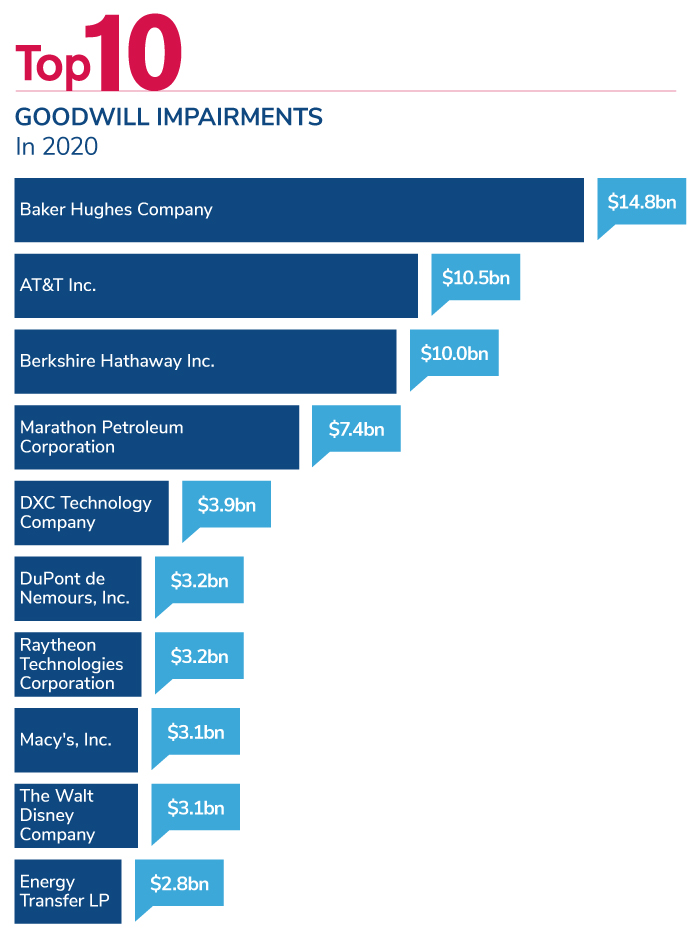 From an industry standpoint, GWI increased or remained at similar levels in eight out of the ten industries analyzed, with Consumer Staples and Healthcare being notable exceptions. These two industries were also the least impacted by the pandemic, with the former benefitting from stay-at-home lockdown policies and the latter (which includes pharma and biotech companies) facing increased demand created by the health crisis.

Conversely, Energy was especially hard hit in 2020, reaching the top of the GWI table, pushing Communication Services down to the second spot. Notably, Communication Services continued to see a significant rise in impairment activity for a second consecutive year, registering a record number of impairments in 2020 and an aggregate GWI of $27.5 bn, the highest level since 2007.

The industries with the largest increase in GWI in 2020 relative to 2019, are as follows in order of magnitude ($ in billions):

The graphic below highlights trends in the aggregate GWI amount for each of the 10 industries analyzed over the period 2016-2020.

Goodwill Impairments by Industry ($ in Billions)

The economic and business outlook improved markedly in 2021, as the approval of new COVID-19 vaccines and the increased rate of vaccination allowed for the reopening of the U.S. economy.

At the time of writing, the disclosed top 10 GWI events for 2021 reached a combined $5 bn, which pales in comparison to the top 10 in 2020 of $61.9 bn. Although full 2021 calendar year-end results for U.S. public companies will not be known for some time, early reporting points to overall GWI merely reaching $7 bn in 2021. Even if GWI increases slightly from this level, an amount this low has not been observed since 2006.**

* The 2021 Study only captures companies that are incorporated in the U.S. Therefore, certain companies that are incorporated outside of the U.S. are excluded from our analyses, even if they are viewed as U.S. companies by financial markets. If such companies were included, total GWI would, at a minimum, increase by Schlumberger’s $8.8 bn impairment in 2019 and $3.1 bn in 2020, leading respectively to an aggregate $79.9 bn and $145.6 bn in each year.