How Transportation Options Stack Up For Millennials

Given the frequency with which millennials drive their own cars, it appears millennials may view driving as more cost effective and reliable, and their best option given the distance they are traveling.

Having a Car is a Necessity

Will Millennials Replace Their Old Car with a New One?

Millennial Considerations in the Car-Buying Process

How Transportation Options Stack Up For Millennials

Where is the Automotive Market Heading?

We asked millennials to indicate the frequency with which they use various transportation options. Globally, millennials drive their own car most frequently, without any other option close behind. Additionally, respondents who said they drive their car never or less than once a week was the least frequent response.

In China (other than Hong Kong), a significantly higher number of respondents use their car either daily or between two and six days per week relative to the global results at 87%, supporting extremely high daily commute times in China, which can be as high as almost six hours per day23 in certain cities. Conversely, in Hong Kong, which also has intense traffic, 67% of respondents use public transportation daily or between two and six times per week, followed by respondents who drive their car at 54%, significantly lower than the global and regional results. 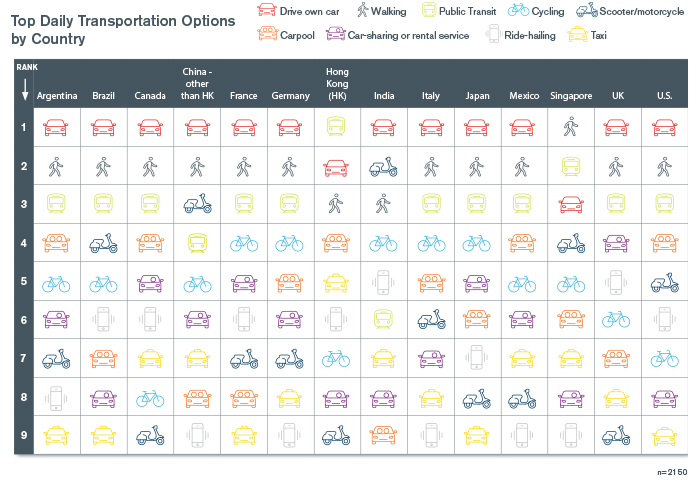 In addition, respondents in Singapore rely heavily on public transportation–72% of respondents use it daily or between two and six times per week, followed by walking at 66% and driving their car at 42%. Research indicates24 that Hong Kong and Singapore had the two highest-rated public transportation systems in the world, with high marks for affordability, safety, convenience and rail infrastructure.

Taking these findings broadly, millennials use public transportation quite frequently when efficient, cost-effective options are available. It is possible that more government-funded public transportation could be more of a risk factor for automotive industry growth than a purported generational desire to drive less, if governments decide to fund infrastructure spending.

Based on the results, millennials cited cost, proximity to their destination and reliability as most important. Given the frequency with which millennials drive their cars, they may view driving as more cost-effective, reliable and their best option given the distance they are traveling. In Hong Kong and Singapore, where public transportation is more common, the reasons respondents selected were similar to the global results, providing further support that if public transportation was improved globally, it could reduce car usage.