Social media is now an integral part of personal life. For vast numbers of people— and particularly for those with little or no memory of the world before the internet— an experience isn’t complete until it has been posted online. As it turns out, this impulse extends even to people who attempt to misappropriate assets. As a result, social media analysis, combined with enhanced image analysis and old-fashioned sleuthing, has become an important component of asset recovery work, used for everything from helping governments locate funds embezzled by unscrupulous officials to helping banks identify holdings of customers who have defaulted on loans.

Recently, Kroll was tracing assets on behalf of a client during a high-profile business dispute. In its social media analysis, the Kroll team discovered that a relative of a counterparty in the dispute had been tagged numerous times in photos of a villa in a golf resort in the United States. Luxury real estate, of course, is a common asset in which to hide missing funds.

Although this was a promising lead—particularly since the counterparty was known to be an avid golfer—there were thousands of such properties in that particular resort town. The social media photo album, however, offered two more clues: a picture that included the name of a bar, and a picture of the relative at a restaurant. From those two data points, the team narrowed down the area of the villa’s possible location.

The Kroll team then scrutinized the photos of the villa more closely and noted a number of attributes, including the shape of the villa’s pool, the patio and nearby sand bunkers. The team then attempted to use satellite imagery to identify a property with these features. While a number of properties on several golf courses emerged as possibilities, there was no clear match between the villa in the social media photo album and any of the satellite images.

At this point, modern digital analysis was augmented with old-fashioned sleuthing. A Kroll analyst travelled to the resort, conversed with locals and walked the perimeter of each of the area’s golf courses to try to identify the property in question. However, when viewed up close, none of the properties matched the social media photos.

The analyst began to suspect that sometime after the pictures in the social media album were taken, the villa underwent renovation, changing its appearance. The analyst then returned to the social media photographs, hoping to identify other clues that might have survived a renovation. As it so happened, one of the photographs of the villa included in the background a tree with a distinctive branch structure. The analyst then began looking for the tree rather than the villa. This time, a match was made—a tree with the distinctive branching was found, next to a villa that looked nothing like the one depicted in the social media album. 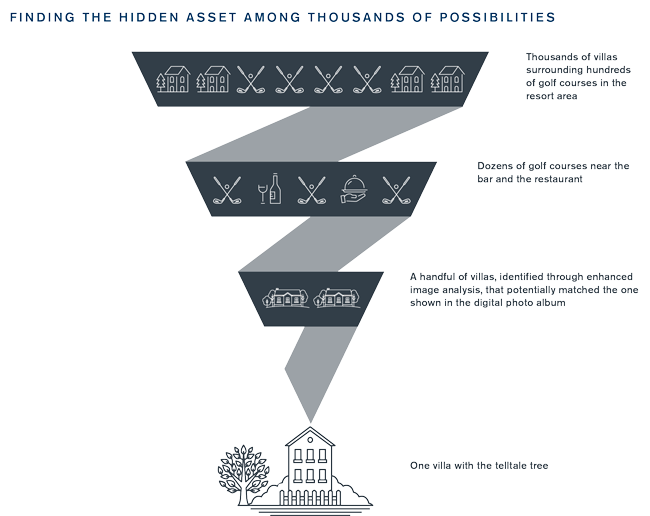 A subsequent in-person search of local property records confirmed what the analyst had suspected: The subject had purchased the villa—for several million dollars—and then, not long after the photos were taken and uploaded to the relative’s social media account, the property was knocked down and completely rebuilt. The analyst was then able to obtain publicly available architectural plans, submitted during the renovation application process, that revealed precise details of the elaborate changes. While the entire villa had been thoroughly modernized, the telltale tree in the background remained as a silent piece of evidence.