The 2022 Kroll anti-bribery and corruption (ABC) survey in Europe included respondents from France, Germany, Italy and the UK. A larger number than in other regions worked in professional services: 12% in Europe compared to 9% in the Middle East, 6% in Asia Pacific (APAC), 5% in the U.S. and Canada, and 4% in Latin America. More respondents in Europe (65%) than in APAC (60%) or the U.S. and Canada (57%) were part of the c-suite with 29% at chief executive officer, 21% chief compliance officer and 15% chief risk officer levels.

Overall, risk and compliance professionals in Europe had a moderate expectation that ABC risks are to increase in 2022. While their risk and governance processes are still evolving and adjusting to global and localized changes in regulatory requirements, responses were mostly on par with those of respondents in the rest of the world. Strong public enforcement actions or trust in regulatory actions therein is an area where changes seem slower to take form in Europe.

Respondents’ Perception of Their ABC Program Effectiveness And the Regulatory Horizon

In contrast to respondents in Latin American (85%) and the Middle East (96%), who expected their business to perform slightly to significantly better, European respondents (56%) were aligned with Asia Pacific (56%) and the U.S. and Canada (58%), who moderately expected their business to perform from slightly to significantly better in 2022.

Business performance expectations for 2022 might impact respondents’ related confidence in anti-bribery and corruption programs, as levels of pressure and monitoring commitments for ABC programs vary proportionately from moderate to high levels of business activities. 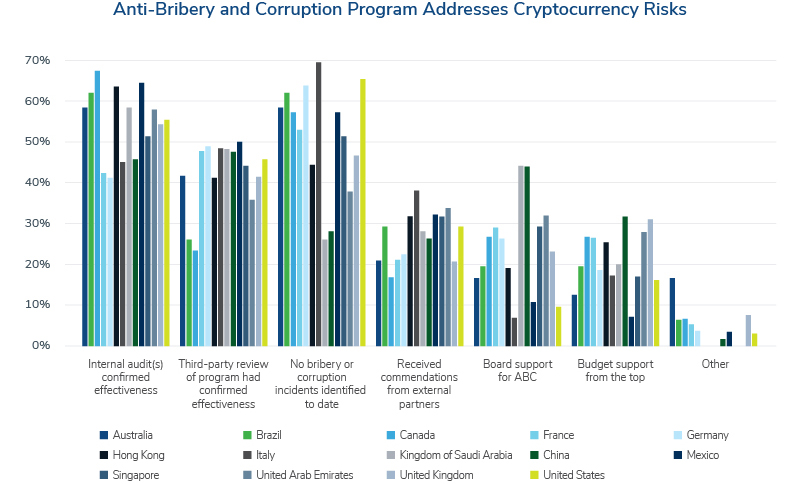 Compared to Latin America and Middle East respondents, European respondents–in line with Asia Pacific and the U.S. and Canada respondents–do not appear as concerned about what might be on the horizon in the next 12 months in the regulatory environment.

Respondents in Europe (46%) expressed their concern while the rest (54%) did not particularly see any cause for concern on the ABC regulatory horizon in the next 12 months. This contrasts with the responses from compliance professionals and board members surveyed in Latin America and the Middle East where more than 70% responded they had concerns. Disquiet about the regulatory horizon could stem from a variety of likely regulatory incidents and trends observed in the past decade.

Overall, respondents were roughly aligned worldwide about the causes for their concerns whether due to:

Kroll’s 2022 ABC survey was fielded from early February to the beginning of March. After February 24 and the start of the Russian attacks in Ukraine, respondents’ concerns relating to geopolitical risks about the ABC regulatory horizon increased. Responses appeared to mark a correlation between rapid changes in the anti-bribery and corruption space around sanctions of individuals and businesses by the UK, U.S., Australia, Japan and the EU, and respondents’ perception of associated risks in the regulatory horizon.

In the same context, when respondents were asked how they anticipate bribery and corruption risks to their company in 2022 compared to 2021, most respondents in Europe (55%) thought ABC risks would stay the same as in 2021. Responses that those risks would increase slightly or significantly in 2022 (35%) were higher among Europe’s respondents after Russia’s war on Ukraine began.

Breaches of Compliance and Governance Processes in Europe

Kroll’s 2022 ABC survey asked organizations worldwide if serious breaches of compliance are met with thorough internal investigations. Responses in Europe (17%) indicated a sentiment that serious breaches of compliance do not lead as much to thorough internal investigations, compared to respondents in other regions: U.S. and Canada (2%), Asia Pacific and Latin America (3%) and the Middle East (6%).

What could explain Europe respondents 10% higher response that serious breaches of compliance are not met with thorough internal investigations? Kroll’s 2021 Anti-Bribery and Corruption Benchmarking Report highlighted a divergence in responses from those who took the survey in Europe. Some of the differences were explained by Europe’s efforts to catch up with other regulatory and compliance practices, such as those deployed since the 1970s in the U.S. and Canada. Might this difference in responses in Europe this year indicate that European companies, at least in Western Europe, still need to adjust and grow their compliance, ethics and governance processes to address compliance breaches through adequate reactions, enforcement and internal investigations? 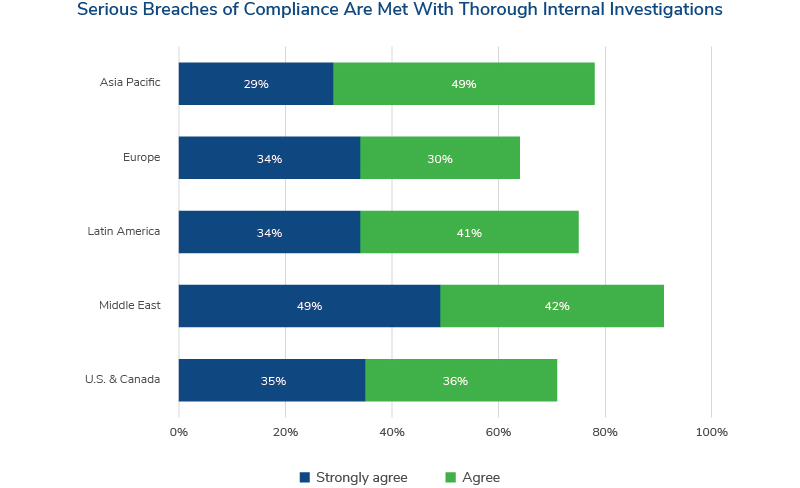 While respondents at European companies appeared to consider that the results of internal and external audits exposed vulnerabilities in their ABC program at the highest rate among all regions,1 responses in Europe were in stark contrast with all other regions in identifying “enforcement action for bribery and corruption violations” as a reason to consider their ABC program as not effective.

Discrepancy in Enforcement and ABC Focus in Europe

Among all respondents, only 3% in Europe linked feeling that their anti-bribery and corruption program is not effective because their organization was subject to an enforcement action for bribery and corruption violations–with respondents in the U.S. and Canada being at 24%, in Asia Pacific at 38%, in Latin America at 61% and in the Middle East at 70%. 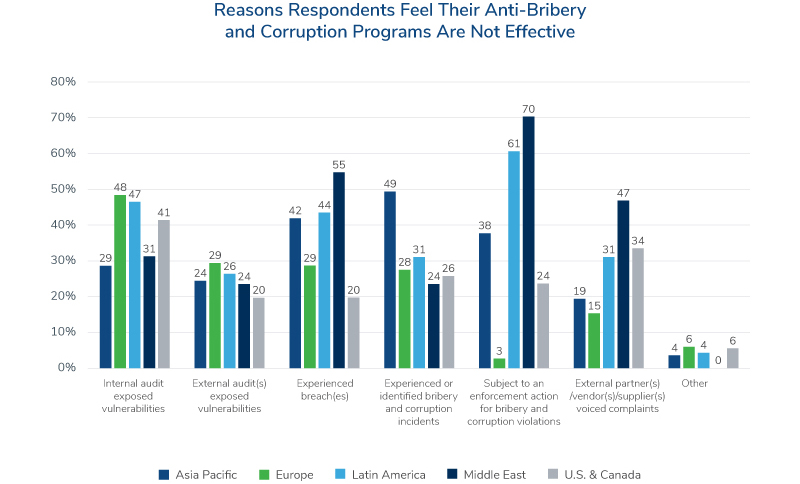 The discrepancy in Europe may indicate, as an external factor, a lack of regulatory and compliance enforcement actions and activities on the continent. Or, as an internal factor, a lack of trust toward such actions, which are often perceived as either not particularly impactful or are the result of political pressures (and sometimes foreign interference) by respondents based in Europe.

Examples come to mind about delayed and regulatory control failings, such as in the WireCard fraud unravelling after German regulators and the market authority, BaFIN, failed to pick up on early signs of governance and control issues at the company. 2

Compared to other regions, the Middle East (46%), APAC (41%) and Latin America (28%), Kroll’s 2022 ABC survey respondents in Europe are the lowest number (14%) after those in the U.S. and Canada (0%) to state that they are implementing any new programs for anti-bribery and corruption as a result of regulatory regime enforcement. The variety in responses across regions where Europe and the U.S. and Canada had the closest answers could be explained by the gradation of the roll-out of relevant regulatory regimes worldwide. Kroll’s 2021 ABC survey showed a trend for Europe to follow on the regulatory footsteps of the U.S. and Canada much more closely than other regions.

The same trend applies to respondents who stated that they are implementing new anti-money laundering programs because of regulator-regime enforcement: respondents in Europe (14%) are the lowest number after those in the U.S. and Canada (0%), while respondents in Asia Pacific and Latin America are at 37% and the Middle East at 18%. 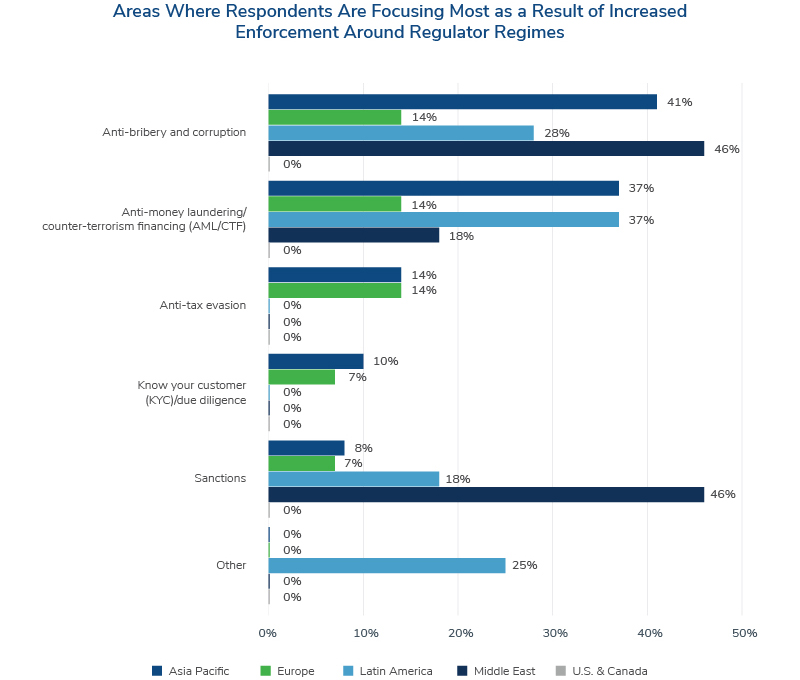 Implementation of new programs and procedures due to enforcement does not seem to be noticed by respondents in Europe, where answers depict a disparity in regulator-regime driven enforcement and ABC focus. Nonetheless, an evolution of the regulatory landscape and the adjustment of compliance and ABC programs seems to follow its course.

Whistleblower Programs in ABC in Europe

Observing a trend where respondents worldwide follow the lead from U.S. and Canadian regulatory and compliance regimes, more stress is put on organizational culture and the impact it has on individual employee compliance towards anti-bribery and corruption, as well as performance. Respondents in Europe (89%) indicated that their company was either currently developing or operating a whistleblower program for employees to report illicit activity, just behind respondents in the U.S. and Canada (90%), while respondents in Asia Pacific (87%), Latin America (83%) and the Middle East (79%) also confirmed the trend.

Most respondents in Europe also confirmed that their organization’s whistleblower program includes policies to protect whistleblowers from retaliation (83%), which are mostly communicated through an annual mandatory online training.3 Noting the mandatory training has its importance as it confirms that organizations are adjusting to new regulatory requirements and following through with systematic online distribution of ethics and compliance training.

Responses align with recent regulatory developments as the EU Whistleblower Directive (2019/1937) is also relevant to organizations worldwide if they have wider EU operations. EU member states were required to implement the Directive transposed into national law by December 17, 2021. As part of this deployment, private sector entities with 250 employees or more had to comply by the December deadline, but smaller entities from 50 to 249 employees had an additional two years, until December 17, 2023. Furthermore, the directive provides latitude to EU member states to separately choose to extend the scope to smaller organizations, depending on the nature of their activities, especially if those activities pose risks to public health or the environment.4

Blockchain in ABC in Europe

Blockchain technology-related interest, while nascent in Europe, is likely to generate scrutiny in the coming months and years as traditional finance and the dynamics of trade and exchange evolve on a global scale. 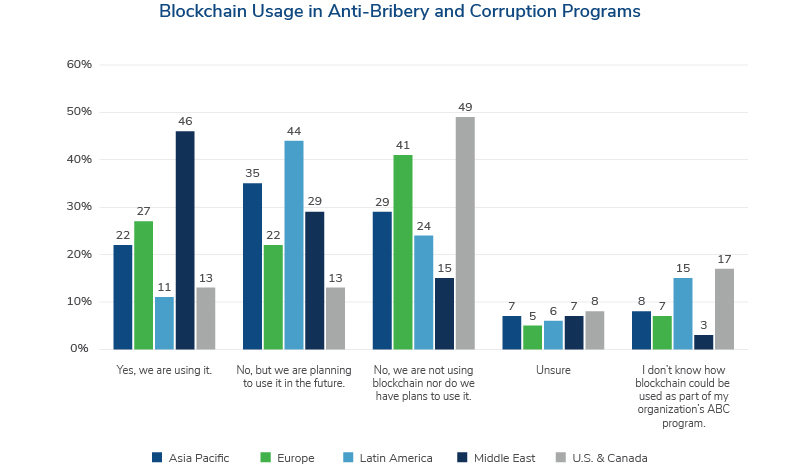 Directly related to an organization’s grasp of the current financial and geopolitical risk environment in ABC, an understanding of the blockchain technology and cryptocurrency might be key to its preparedness to respond to challenges posed by new worldwide bribery and corruption risks deriving from crypto activities. Recent developments show that ABC and crypto risks were directly affected by Russia’s war on Ukraine and subsequent updates of sanction regimes. Numerous reports alerted to risks of sanction circumvention via crypto transactions, and the EU imposed enhanced due diligence checks on crypto wallets used for bank deposits with larger amounts. The prompt evolution of the crypto risk landscape linked to the current geopolitics was seen in Kroll’s 2022 survey responses in Europe and beyond. Respondents who replied that their organization was not prepared for regulatory requirements to prohibit the use of cryptocurrency payments in response to a ransomware attack increased after the Russian war on Ukraine began. 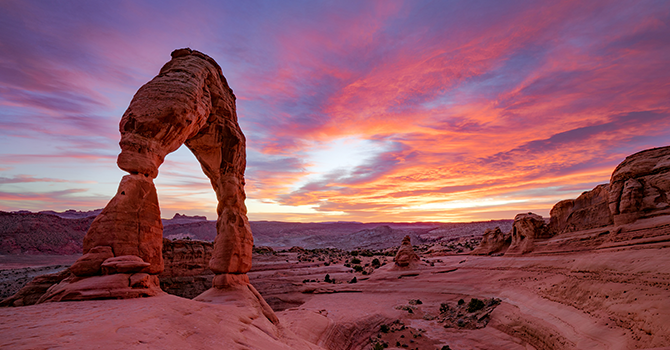