Culture as the Basis for Compliance Effectiveness

Evolving Challenges with Enhanced Due Diligence

The Role of Automation Technology in ABC Programs

Recently, social media has become an important component to understand a third-party’s online footprint. Social media searches can be used to help manage ABC risk and is increasingly becoming part of ethics and compliance programs. 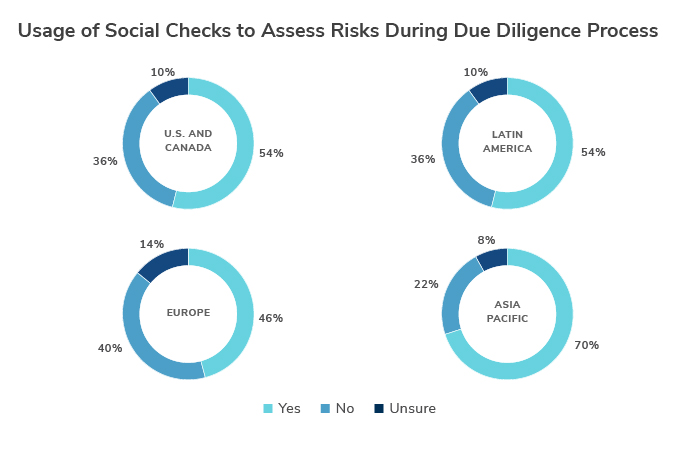 One reason for APAC’s emphasis on social media checks could be explained by the large size of its employment market as a growth market with a large workforce, a significant turnover, and the consistency of pre-employment background checks. Social media checks tend to provide more relevant information as part of ABC when it comes to individuals. While this may not be the only explanation, it could certainly be part of the reason. The APAC region also features jurisdictions, such as Indonesia, where many businesses have a social media profile rather than a website and social media checks are consequently the most relevant.

Overall, compliance professionals seem to rely on social media checks more, in jurisdictions where access to publicly available information is less assured or where companies use social media rather than a website to provide their services and contact.

Social media information highlights money laundering, corruption and reputational risks not always identified through standard public domain information, including public record, internet and media, and litigation and regulatory repositories. As social media checks may help identify regulatory risks such as high-risk business, political connections, insider trading risks, connections to extremist or organized crime groups, they could also take more prominence among screening solutions for environmental, social and governance (ESG) requirements. While social media may not be as widely used as other sources, it certainly has a role to play in ABC programs.