While VPNs are traditionally more secure than RDP solutions, several VPN providers released significant software patches in the past year, a fact that cybercriminals were quick to seize on. Organizations that haven’t updated their VPN software are now prime targets for ransomware operators and other malicious actors. In a recent Cybersecurity Advisory, the National Security Agency (NSA) urged organizations to check VPN products for upgrades. The advisory warned, “Upgrade your VPN products to the latest vendor-released versions to protect your networks from these attacks. The known vulnerabilities include Pulse Secure™, Palo Alto GlobalProtect™ and Fortinet FortiGate™ VPN products.”

Pulse Secure VPNs are particularly vulnerable due to the critical CVE-2019-11510 alert issued by the company last year for a flaw that allows for remote authentication to a VPN appliance. Pulse Secure’s advisory stated vulnerabilities could “allow an unauthenticated user to perform a remote arbitrary file access on the Personal Communication Service (PCS) gateway … and allow an authenticated administrator to perform remote code execution...”, both of which the advisory further added, “pose significant risk to your deployment.” This advisory was updated in 2020 to reflect new exploitation information and recommendations. Given the fact that there is no workaround, the Cybersecurity and Infrastructure Security Agency (CISA) recommends applying patches provided by the vendor and performing all necessary system updates.

Actors are mainly identifying potential corporate targets by scanning the internet and then gaining access to user accounts via known exploits. Skip to the “Exploit in Action” section of this newsletter to see a video demonstration. In the past, threat actors most often compromised VPNs through “session hijacking,” after getting their hands on a valid session ID through means such as brute-force attacks or reverse engineering.

Thomas Brittain, Associate Managing Director at Kroll, said that has dramatically changed. He commented, “We’ve been seeing engagements where actors are getting access without session hijacking and that’s due to CVE-2019-115110’s pre-authentication vulnerability that allows unimpeded access. Essentially, actors can query the vulnerable VPN to pull a unique ID for an account, then leverage web browser development tools to manually set a value to the ID, and that allows them unauthenticated access to the VPN administrator console.” From there, it’s generally short work for actors with system access to remotely connect to internal systems.  Once on your internal network, they download and execute programs and commands to conduct reconnaissance and harvest passwords enabling them to move laterally in the network and, in many cases, prepare to deploy ransomware.

The video below demonstrates how the vulnerability can be exploited in an unpatched system. Actors remotely scan a system to extract an admin session ID and then bypass the admin login screen by loading the session ID to the browser console, which gives them unauthenticated access to all admin functions. In this example, actors force Windows’s calculator app to load after a VPN user connects to the network, but a real attack would execute more damaging scripts.

VPN Exploits on the Dark Web

Often the initial challenge in exploring vulnerabilities is finding a way to exploit them, as it involves careful research and may require a rethink of existing attack vectors. Sophisticated exploit scripts can go for thousands of dollars in dark web markets, and some particularly impactful exploit tools are actually considered military weapons. For CVE-2019-11539, however, effective exploits are available on the dark web for free, as you can see below: 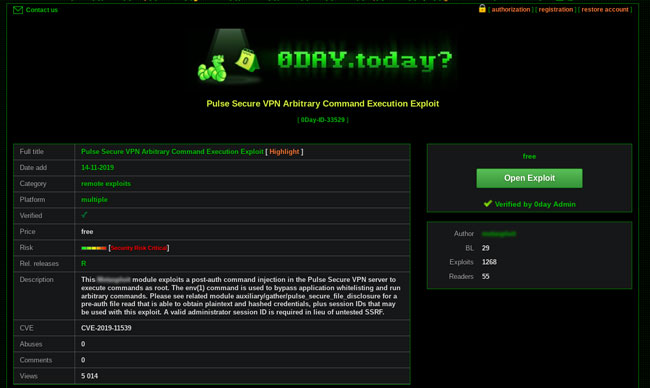 Kroll’s recent case studies emphasize the critical need for organizations to know the current status of their VPN infrastructure and apply all patches prior to connecting to the internet.

Sodinokibi ransomware actors entered a client’s system through a vulnerability in Pulse Secure VPN. The actor began deploying the ransomware across all the client’s servers and later sent ransom demands, threatening to publish exfiltrated data.

Actors struck just one to two days after a client added two unpatched VPN appliances to their network. Kroll’s investigation found that prior to a ransomware attack, credentials for the client’s domain administrator and IT director were compromised. Two new domain admin accounts were created by the actors once they gained access to the network. This example demonstrates the importance of patching vulnerable VPN appliances, as quickly as possible.

Crucial Consideration for the New Normal

Even though some organizations are already planning to return their employees to offices, the move will be gradual; many organizations may prefer to continue remote working indefinitely. VPN configuration remains a crucial step in protecting a remote workforce, and it’s imperative that vulnerabilities like CVE-2019-11539 and CVE-2019-115110 are addressed, along with many others, as part of a robust vulnerability management program. For further guidance, contact a Kroll expert at one of our 24x7 cyber incident response hotlines or our Contact Us page.

Protecting Elections: Security Beyond the Machine