In May 2020, Kroll began observing an increase in compromises related to vulnerabilities in Telerik user interface (UI) software, a spinoff of Telerik’s web software tools which provides navigation controls. The vulnerability, which is outlined in CVE-2019-18935, involves a .NET deserialization vulnerability in the software that allows for remote code execution. Kroll observed more than a dozen cases in a short span of time in which attackers targeted the Telerik vulnerability to deploy remote access tools or credential harvesting software and then gain remote access to the client’s network. The most often targeted clients observed by Kroll within the sample timeframe were in the healthcare and government sectors (Figure 1). 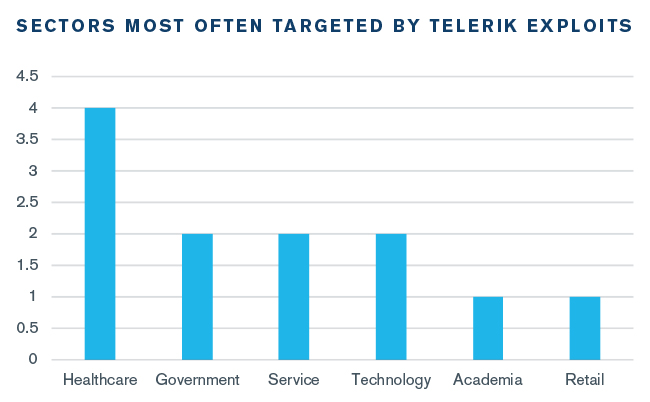 How Do Threat Actors Exploit the Telerik Vulnerability?

The deserialization attack enabled by CVE-2019-18935 is different from the previously exposed encryption flaw in CVE-2017-11317, which allowed unrestricted file uploads. In the deserialization attack, rather than submitting the expected Telerik.Web.UI.AsyncUploadConfiguration type with rauPostData, an attacker can submit a file upload POST request specifying the type as a remote code execution gadget instead. This gives attackers the ability to execute software, code or webshells indiscriminately within the webservice.

Anthony Knutson, Senior Vice President in Kroll’s Cyber Risk practice, provided more details: “Specifically in the webshells, our engineers were able to recreate what the threat actor would see when traversing specific pages and demonstrate how these webshell files could go undetected by requiring the specific user-agent string we mentioned. Without that user-agent string, the page would load as an HTTP 404 error, and the webshell would not activate.”

In early June, Australia suffered a large volume of state-sponsored attacks related to the Telerik UI vulnerability. The government observed advanced persistent threat (APT) scanning for unpatched versions of the Telerik vulnerability and leveraging publicly available exploits to attempt to exploit these systems. “The actor has been identified leveraging a number of initial access vectors, with the most prevalent being the exploitation of public-facing infrastructure — primarily through the use of remote code execution vulnerabilities in unpatched versions of Telerik UI,” the report stated.

According to recent reporting by the New Jersey Cybersecurity and Communications Integration Cell (NJCCIC), a group dubbed Blue Mockingbird recently infected thousands of computer systems via the Telerik vulnerability. “The group conducted a cryptocurrency mining campaign by targeting public-facing servers running ASP.NET apps using the Telerik framework. By exploiting CVE-2019-18935, the group was able to install a web shell in the compromised server and then used a privilege escalation tool to gain accesses needed to modify server settings and maintain persistence,” the report stated.  Devon Ackerman, Managing Director in Kroll’s Cyber Risk practice,  added, “In Kroll’s estimation, for the investigations where actor groups have leveraged the Telerik vulnerability to push in cryptocurrency mining operations, the activity was noisy and burdensome to the impacted systems. In every case that Kroll investigated involving this methodology, the client’s IT and security team had already noted the system resource impact tied to the miners—it wasn’t stealthy, it wasn’t a structured attack, but it was noisy, like a thief stumbling through a victim’s home knocking over lamps and cabinets alerting everyone within ear shot of their presence.”

The following recommendations, provided by Kroll experts Michael Quinn and Devon Ackerman, should be taken into consideration to prevent exploits directed at the Telerik vulnerability:

Leave Nothing to Chance

Managing an ever-expanding list of vulnerabilities takes considerable resources and it’s especially hard to determine which vulnerability deserves priority attention. For internal teams burdened with a host of other priorities and a remote workforce, support from dedicated experts who have the frontline expertise, resources and technical skills to assess your exposure can greatly reduce your risk profile. Talk to a Kroll expert today via our 24x7 hotlines or contact form.